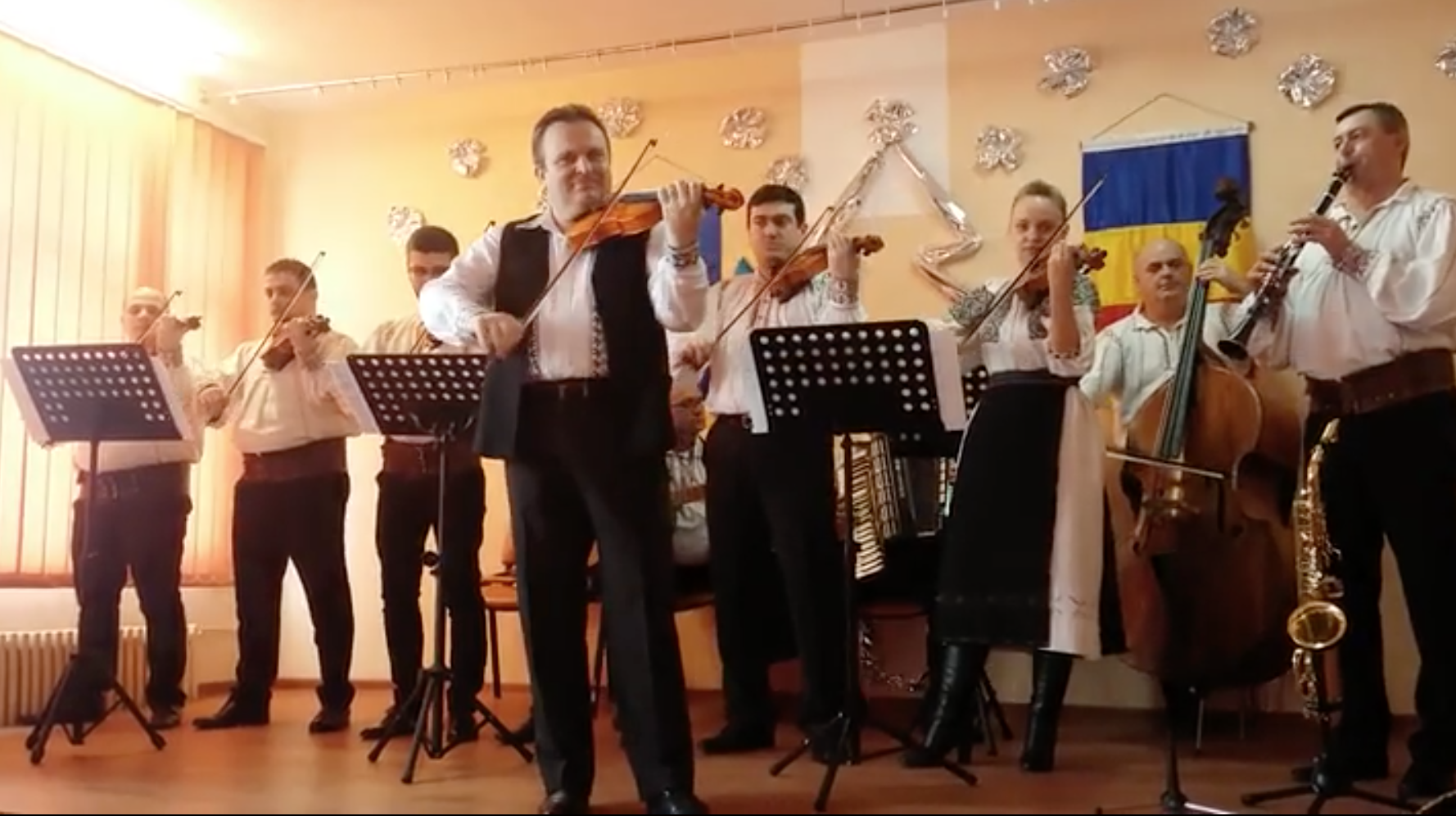 Is Romanian folk music a globally accessible art form, much like western classical music? Or does it require a highly specified cultural indoctrination that is ultimately inaccessible to non-Romanians?

In February I accepted an invitation to perform with Cununa Transilvană, Cluj’s elite muzică populară orchestra directed by Ovidiu Barteș. I selected an învârtita, a couples turning dance from Satu Mare, mostly because I like the feel and sound of the învârtita’s asymmetrical aksak rhythm of ‘long, short, short,’ and think of it as a prototypical Romanian dance. A few days after the concert, my friend – I will call him Vasi – mentioned casually that it wasn’t the right selection for me to perform. I should have selected something with a binary accompaniment rhythm, he said, something with an even feel since, as a non-Romanian, I couldn’t feel the învârtita rhythm right.

My ego was a bit hurt by the comment, and I’ll never know if his judgement was clouded by my being a non-Romanian, but I also knew that there was something honest in his critique of what he had heard in my performance. I had noticed it, too. At home I had no recording of the song to refer to, so I carefully rehearsed the notes transcribed by Ovidiu Barteș himself. I trained my body to play the pitches, ornaments, and rhythmic cells as they appeared on paper to the best of my ability. Yet in rehearsal, the melody as I played it didn’t match exactly how the orchestra played it. My interpretation included gestures that changed the feel of the musical phrases from the orchestra’s interpretation.

Here I am playing the refrain, followed by the orchestra playing the same melody, in rehearsal:

I hear two major differences in articulation between my version and the orchestra’s version. The first difference is the articulation of the opening four sixteenth notes (as well as on the repeat):

The orchestra plays the sixteenth notes like a well-oiled machine. They play each note with equal bow length and speed, and with no audible difference in articulation between down and up bow strokes. I, on the other hand, gather short groups of notes like these as a gestural motion rather than articulating individual notes. The danger in doing so is potentially “swallowing” up one or two notes, making it more difficult to hear all four pitches equally well. Another possible danger is rushing through the note sequence. When executed well, however, the advantage is creating a sense of movement, a sense of singing, a sense of swinging forward.

The second, and more obvious difference, is the articulation and timing of the octave movement:

Again, whereas the orchestra reads the eighth notes as metronomically equal rhythms, my interpretation is to swing the rhythm, lengthening and leaning more heavily on the top A. I don’t know where I got the idea to play this spot with such articulation, but my sound and feel was exactly the way the melody made sense to me as I practiced it on my own, before attending rehearsal.

Mind you, these are small details, but the results are huge. The first time we ran through the piece together, our collaboration sounded quite different from what I had imagined and practiced striving for in my independent practice. Equally important, I felt the difference; I had to adjust my body movements to fit with the orchestra.

How much artistic control do I really have?

Should I attribute these different interpretations to cultural differences, or am I simply expressing myself as an agentive, individual musician? Musically speaking, I prefer the accents the way I had realized them in this particular performance, but it’s at the cost of being labeled a cultural outsider who’s not really sounding right to Romanians.

And I have noticed musical inflection differences in some of my past performances of Bulgarian folk music, too. They are obvious things that I can point to, like melodic ornaments, that make me sound differently from my musical sources. What’s more, some of my accents are subconscious bodily gestures that I only notice after the fact.

Here is an example. My friend and mentor Donald LaCourse, director of Ethnic Dance Theatre in Minneapolis, came across a somewhat recent performance by a Romanian dance group on YouTube. He noticed that at one point they used a recording of a Bulgarian kopanitsa that was quite familiar to him. The recording was of my Balkan band, Orkestar Bez Ime, also from Minneapolis. How do I know that it was our recording? I can hear one short slide that I played on my violin at the beginning of the tune that is, stylistically speaking, inappropriate for Bulgarian music. Again, it’s the tiniest detail, but one that’s a glaring non-Bulgarian accent. OBI’s recording starts at 22:45. You can hear my short violin slide at 22:55.

Training your body for classical vs. folk music

The fact that I had used these slides inappropriately and without cognizance cannot be explained in a meaningful way by using abstract terms like ‘culture’ and ‘artistic agency.’ Instead, I need to look at the processes at work in creating musical accents. Two processes notoriously difficult to talk about are proprioception, the internal sense of our own body in movement, and tacit knowing, how we know things that we can’t explicitly explain, like how to ride a bicycle. Looking closely at processes might help me to understand what makes or informs my musical accents.

My formal training in music was in western classical music. In this tradition, every aspect of the relationship between the body and the violin is scrutinized, explained, and corrected until it matches the teacher’s expectation. As one example, I learned to play individual melodic notes and then add vibrato (always) or trills or other ornaments (as indicated by written notes on a page) to add excitement. Every aspect of my music making was under the control of some authority, and my success as a musician was measured by my ability to meet the expectations of those authorities.

Learning how to play folk music from places far away from where you grew up or have lived is tricky business. When I began learning how to play folk music from Eastern Europe (very generally speaking), I conceptualized it as something specifically not western-classical. Because I didn’t understand how these various tone colors, ornaments, and extended techniques were produced by Bulgarian, Romanian, and Hungarian violinists, I changed the way I approached the violin. I made my left wrist less rigid, often bending it inward in a symbolically anti-classical fashion. This changed my physical orientation to the fingerboard. My classically trained vibrato began disappearing due to non-use, and was eventually replaced by a half-vibrato-half-trill ornament that is used in some Trio Transilvan folk music, not unlike a baroque trill.

For the first few years, I devised these changes on my own. Living in Minnesota, I found no instructions or role models to explicitly show or tell me how to make my violin sound like a Bulgarian gadulka or like a Romanian lăutari. In terms of Eastern European folk music, I had been developing my musical proprioceptive pathways in a cultural vacuum. Aside from listening to recordings I could find, I had to wing it. In terms of approximating those various folk music styles, the results, quite frankly, were hit or miss. After fifteen years, I am still trying to figure out the perfect mix of a strict ‘classical’ approach and experiential ‘anti-classical’ approach needed to achieve the results I want. Ultimately, my musical point of reference is still western-classical.

Since arriving in Cluj last October, I have learned that many, if not all, Romanian muzică populară musicians were classically trained. My friend, who I mentioned earlier, used Carl Flesch scale books and studied Ševčik, Dont, and Kreutzer etudes, just like I did. He and I both understand the violin and making music through a western classical mindset.

But he also grew up in Romania, with parents who were folk dancers and singers during Ceaușescu’s communist regime. I can’t possibly imagine the impact that particular setting might have had in terms of his proprioceptive and tacit musical understanding. I do know that, unlike me, he never went through a period of trying to change his playing style. He already had a strong opinion of what Romanian folk music was all about and that he specifically wanted to play muzică populară, not muzică tradițională, which is the folk music of non-classically trained villagers.

In fact, he believes that it is impossible for any classically trained musician to play muzică tradițională, so there is no point in even trying to approach the violin the way they do. Being a foreigner, a cultural outsider, such a limitation was something that I never considered. I assumed that I could play various types of Romanian folk music, using different approaches to the violin, if I worked on it diligently and in enough detail.

My friend brushes off different approaches to the violin as a simple matter of educational differences: classical musicians know too much to play in less-refined ways, and muzică tradițională musicians don’t know enough to play high art music. But I believe that different approaches to the violin are not just a symbolic line between ‘us’ and ‘them’; I think they offer a deeper understanding of musical processes and musical identity. A violinist’s approach to their instrument and repertoire simultaneously creates and reflects, in a very tangible and physical way, their internalized musical understanding.

The various pedagogical processes that train different bodies and musical minds in profound ways still needs to be explored. It is at the proprioceptive level and in tacit knowing that enculturation really matters. This, I believe, is why might I sound close, but not exactly, Romanian when I play an învârtita.