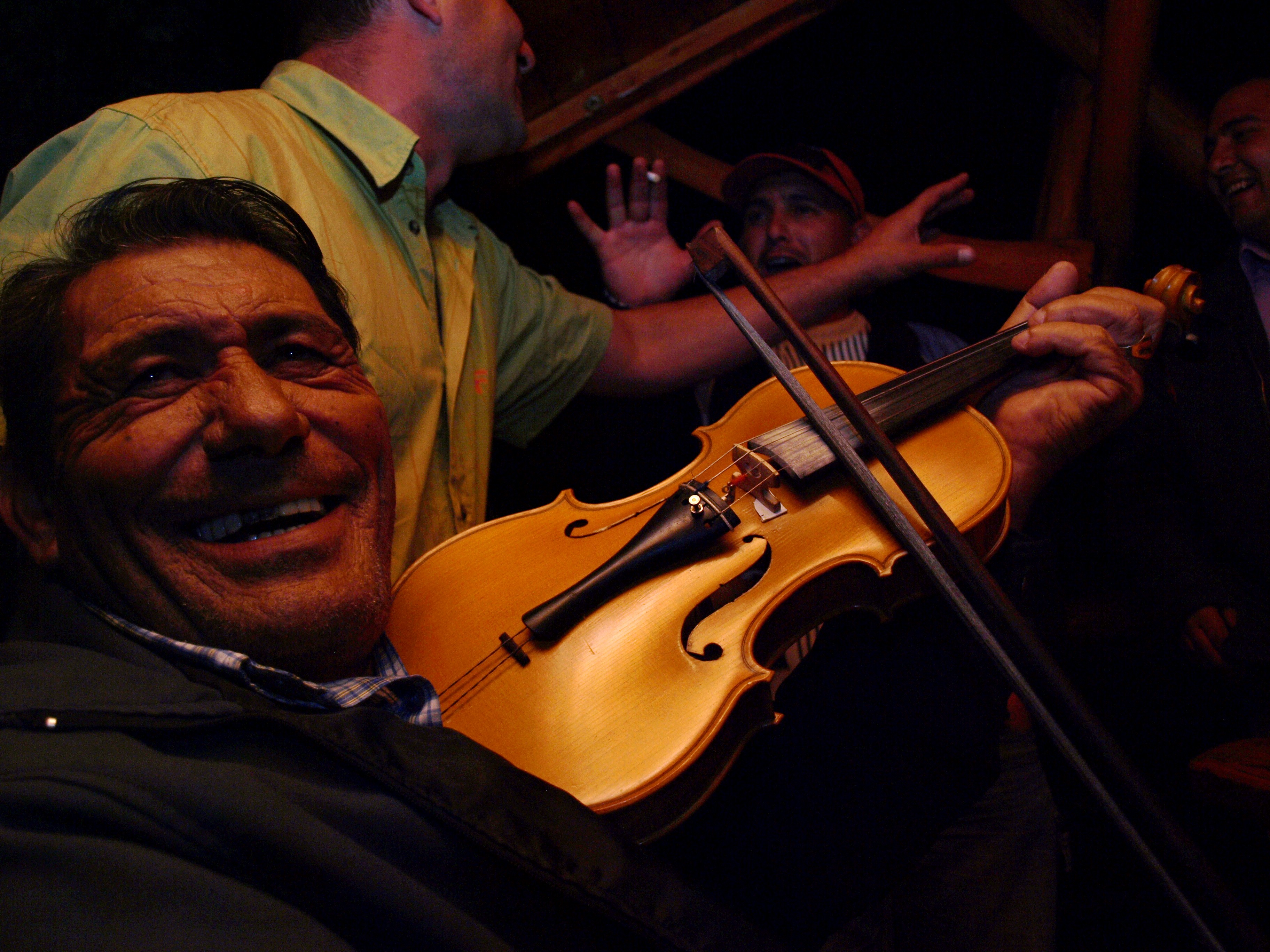 In December I published a piece called What is Romanian Folk Music? In it I described the difficulties of talking about Romanian folk music due to nonexistent or non-standardized labels among Romanian musicians and folklore scholars. I then generated a list of Romanian folk music subgenera in order to gain some clarity.

Labels help us point to a thing so that we can categorize that thing, stick it in a list, column, file, or box. We label MP3, LP, cassette, and 8-track recordings of songs in order to sell a product, or to organize our iTunes collection. But while a recording of folk music is an object, folk music itself is not. Folk music is something that humans do; it is a process, an activity.

Folk musicians (I think, perhaps, all musicians) are rarely so rigid that they conform their entire life’s musical activities to align with labels. In this blog post, I challenge the usefulness of labeling folk music. Although there are many musical activities ‘betwixt and between’ the subgenera of Romanian folk music, I decided to focus on just two common frustrations for purists: the use of electric instruments and traveling repertoire.

Compare this mentality to the summer of 1965, when Bob Dylan was called a traitor by some American folk music purists for using electric instruments at the Newport Folk Festival. Whatever Dylan’s intent (or lack of), the performance challenged the audience’s preconceived notions of what folk music is, and by extension, how he should produce his work. The same puritan mentality exists today in Romania concerning muzică tradițională. The argument often includes that ambiguous and dangerous word: authenticity.

Say ‘authentic’ to any serious ethnomusicologist, and you will get an earful about using that word. The word applied to folk music is meant to point to a music’s pure origins. But what exactly does ‘pure origin’ mean? Where is origin located? If it is located within a singular person, like Bob Dylan, then all of his music making is authentic, no matter what instruments he uses.

I spent last New Year’s celebration with my boyfriend at the excellent Maramureș Resort in Budești. As their website advertised, they threw evening parties, complete with live music. Even though the musicians played traditional Maramureș folk songs on electric violin and keyboard, no one seemed to mind. Regardless of the beat generated by the keyboard, Musică etno is simply not the correct label for this music. The only way to label it is muzică tradițională din Maramureș. This is violinist Marian Berinde.

According to folklore purists, the real Romanian tradițională musicians are the ones that not only play on acoustic instruments, but those who know and play melodies from their home village, or at the very least, music of their home region. It sounds simple and clear-cut. But melodies are constantly in circulation, being picked up and passed around as musicians watch youtube, listen to recordings, and travel for festivals, weddings, baptisms, funerals, and parties. It’s extremely difficult to keep track of those melodies as they sneak their way into village repertoire. And this circulation has been happening . . . well, probably always. So at what point in history do we start calling a tune ‘original’ to that village?

Today, no one would say that the melody to Happy Birthday is an original Palatcă folk melody. But Florin Codoba, a well-known Palatcă violinist, likes to make the joke of playing Happy Birthday as a batuta (szökös in Hungarian). While he is very careful to distinguish between the traditional music from Palatcă that he learned from his dad and uncle, and new music he picks up from other places, the people in Palatcă don’t know the difference. Like he said, if he played Happy Birthday for them at a party, they would dance to it. (Apologies for my gasps in this recording . . . he caught me by surprise and I was shaking from laughter.)

Happy Birthday didn’t travel directly from America to Palatcă. Florin learned the melody from the Transylvanian-Hungarian band Heveder, from Sfântu Gheorghe, Romania, when they worked together at a music and dance camp in Michigan.

A pan-Transylvanian tune. . . in Maramureș

Allow me to return to that amazing Maramureș vacation. The next night after the New Year’s party, another group of traditional musicians came over to the resort to play at the campfire. When we took the party inside to get warm, we hung out at a table and passed the violin back and forth, sharing tunes. At one point, the band played a țiganește – a Roma (gypsy) tune.

I had learned this particular melody from Dűvő, a Hungarian táncház band from Budapest. It is a pan-Transylvanian melody, meaning that it is not associated with a specific village or subregion. However, up until this night, I had only heard this melody played by Trio Transilvan ensembles, which consists of violin, braci (3 string viola), and double bass. In this example, Dűvő added a cimbalom (țambal). (Audio by Dűvő)

The people in Maramureș, especially in Breb and Budești, are proud of their traditions. I expected their muzică traditională band, which consists of cetera (violin), zongora (guitar), and toba cu cinel (drum with cymbal), to play Maramureș-specific melodies. They did, but they also knew how to play the same pan-Transylvanian Roma melody as a táncház band from Hungary. This is ceterași Vlasin Gheorghe.

There are still some people, including some folklore scholars in Romania, who still believe that there is (or was) a purely original repertoire authentic to the region of Oaș in northwestern Romania. In these conversations they always bring up isolation: the days before radio, the remote villages nestled in the mountains with impassable roads, the people cut off from all outside communication for hundreds of years. And, while complete isolation throughout all of history is impossible (the folk music of Oaș is played on western classical violins and guitars), there might be something to the relative isolation (those instruments are modified in the craziest ways invented by the Oașean).

In 2010, my boyfriend and I were traveling through the region of Satu Mare into Oaș. We decided to stay overnight at a spa just outside of a village called Negrești. As we were getting our luggage out of the car, I heard music floating up through the trees. ‘Do you want to go check it out?’ I asked, assuming that it was recorded music coming from a restaurant or pub stereo. We immediately got back into the car and followed the sounds of the music wafting in through our open car windows. We pulled over near a dark clump of trees and found a group of guys celebrating a birthday in a park shelter. Among them was Gheorghe Metei, an amazing Oașean cetera (violin) player, playing muzică tradițională from Negrești.

They invited us to stay and we had a great time. I took a lot of photos and recordings. And here, too, we passed the violin around, everyone taking turns on the crazy instrument (see the featured photo at the beginning of this blog post to check out the violin modifications). I tried to play the Ciocârlia (The Lark), which I failed at miserably on this instrument. Here is Nicolea Botgros performing the famous Cafe-concert piece with his ensemble. (Video by greegorich)

All artistic creations are the result of surrounding influences. ‘Authentic,’ it turns out, is really a political word intended to make everyone scramble after an ideal type, an abstraction, which is another way to say that it doesn’t actually exist in one particular person, place, time, or form. Perhaps worse, the word suggests the opposite is also possible: that there is an inauthentic way of playing folk music, which contradicts the concept of folk music in the first place.

After casting aside the hoax of authenticity, I began to realize that there is no reason electronic instruments cannot be used in folk music, or that the melody to Happy Birthday cannot eventually become a batuta melody from Palatcă. These things can and do happen, often. It just makes labeling a little more complicated.

[All video and audio examples by colleenfiddle unless otherwise noted.]