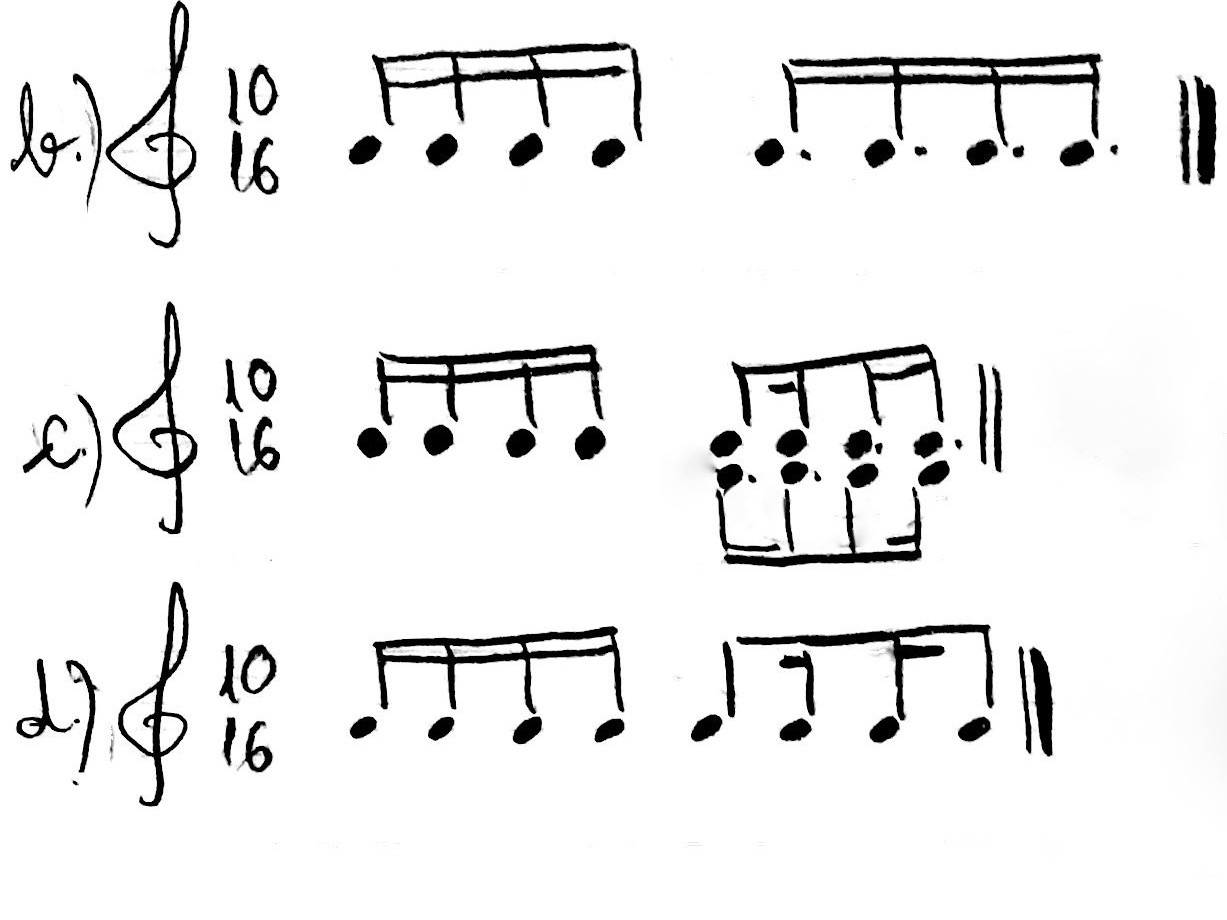 In my quest for understanding the folk musics of Transylvania, I learned quickly that there is an ongoing separation of Romanian music and Hungarian music. While everyone seems to agree that much of the music from the area around Cluj is so mixed that one cannot unravel the influences and divide them into a neat and tidy binary, Hungarian and Romanian folk music scholars and aficionados still claim that certain musical characteristics belong to one ethnic group or the other.

You can hear it at the beginning of this clip and throughout:

The other cell is used in some învârtita dance music, labeled as Romanian:

You can hear it in the accompanying instruments in this clip:

This cell, divided as 4+3+3, is what musicologists call an aksak rhythm, literally meaning “limping.”

Not only are these rhythmic cells ascribed Hungarian or Romanian labels in Transylvanian music, they are also considered exclusive – even when the two are combined. The last audio clip was an example of the basic învârtita accompaniment rhythm. Now here are the five most common rhythmic cells of învârtita melodies:

Our violin folklore professor at the Gheorghe Dima Music Academy, Ovidiu Barteș, explained that the first four variations are natural Romanian rhythms, but an  învârtita melody played with this last variation is incorrect in Romanian folklore, due to its Hungarian element.

In various conversations in class and rehearsals, students discussed why Hungarians play învârtita rhythms differently. As one student put it, ‘Hungarians can’t play aksak!,’ explaining further that Hungarians simply can’t feel aksak rhythms correctly. The opposite, but similar claim that I have heard repeatedly is that Romanians would never play the Hungarian-labeled ‘long, short, short, long’ rhythmic cell when performing folk music.

These claims echo the results of Béla Bartók’s work in Hungary and Romania in the first half of the 1900s. After he collected songs from peasants living in the countryside, Bartók categorized them. For songs with text, he based his categorization system on language. For example, for Romanian colinde (Christmas carols) he based the first categorical division on the number of syllables sung in a musical phrase. Because the Hungarian and Romanian languages sound so different from one another, Hungarian being from the Finno-Ugric language family and Romanian from the Romance family, it stands to reason that the melodies of their text-based songs would sound quite different as well.

In the above diagram one can see, as you trace your eyes from the tree trunk up through the branches, that Bartók starts his categorization process by analyzing the sound of language and then divides those results based on the sound of the melody. But instead of revealing the mechanisms of culture at work, his equation of language and music imprints a cultural meaning on the music that may or may not be true. Isn’t it possible for a particular melody of a song in one language be adapted to a different language? It is here, where the function of language and musical sounds criss-cross and are mapped onto one another, that notions of musical ethnicity seem to emerge. Bartók used peasant songs with text as the basis of his entire work, and as proof of pure musical activity of distinct ethnic groups.

But what about instrumental music without words? For this genre, Bartók based his categories on the function and structure of the melodies. While it’s beyond my scope in this blog to dig into musical theory, it suffices to say that he created an increasingly detailed system of classes, subclasses, and groups based on his analysis of melodic phrases, strikingly similar to his classification system of songs with text.

So much attention in Romanian folklore scholarship is hung on these branches of Bartók’s work. Because it deals with musical theory, it has the air of science. At the same time, the tree diagram, which I copied from folklore class, symbolizes rootedness, the pastoral, the natural character of folk music.

But perhaps the most important fact of Bartók’s work is not addressed in these diagrams: what makes up the roots of the tree? Who, exactly, were the peasants who provided him with these melodies?

“The subject being folk music, I made my collections exclusively from the peasants and from people who either were an essential part of village community life or else fitted musically into this life by functions which gave them importance in it (gypsy violin players). Gypsies living in villages are completely assimilated musically according to the type of people among which they live; therefore, there is no reason to exclude them. There are, anyway, but a few melodies sung with text by them. As to instrumental music, we are definitely depending on gypsies in certain areas where only gypsies are “professional” musicians” (4).

So here is the second, and most obvious, problem with Bartók’s one hundred-year-old ethnic labels of Transylvanian folk music: you have to ignore the ethnic identities of his musical informants.

Folk music is created, time and again, in the performances of each musician. When taking folk musicians into account, ethnic labeling of Transylvanian music is no longer cut and dry.

In fact, the first two clips I shared above, one a Hungarian csárdás and one a Romanian învârtita, were performances by the same man, Alexandru Țitruș, who is considered one of the greatest self-taught, Romanian folk violinists from Transylvania.

Then there is also this recent performance by the likewise amazing, self-taught musician Varga István “Kiscsipás,” accompanied by Toni Rudi (kontra) and Nyilas Levente (bass). Here they perform one of the învârtite that they taught at the 2015 Hungarian-sponsored folk music and dance camp in Kalotaszentkirály (Sâncraiu), Romania:

In terms of understanding Transylvanian folk music, Bartók’s intuition for using the best musicians in the area is much more credible than his grouping of collected music based on ethnic labels. Bartók described his informants as village Gypsies (today, it’s best to use the word Roma). It’s telling that instead of identifying them as Romanian or Hungarian Roma, he identified them as professional musicians. It seems that in the absence of their ethnic credibility, professionalism raised the Roma musician’s social standing to an acceptable level for representing Hungarian and Romanian ethnic groups.

In light of all of this, it seems that jockeying for ethnic labels in Transylvanian music is a moot point. 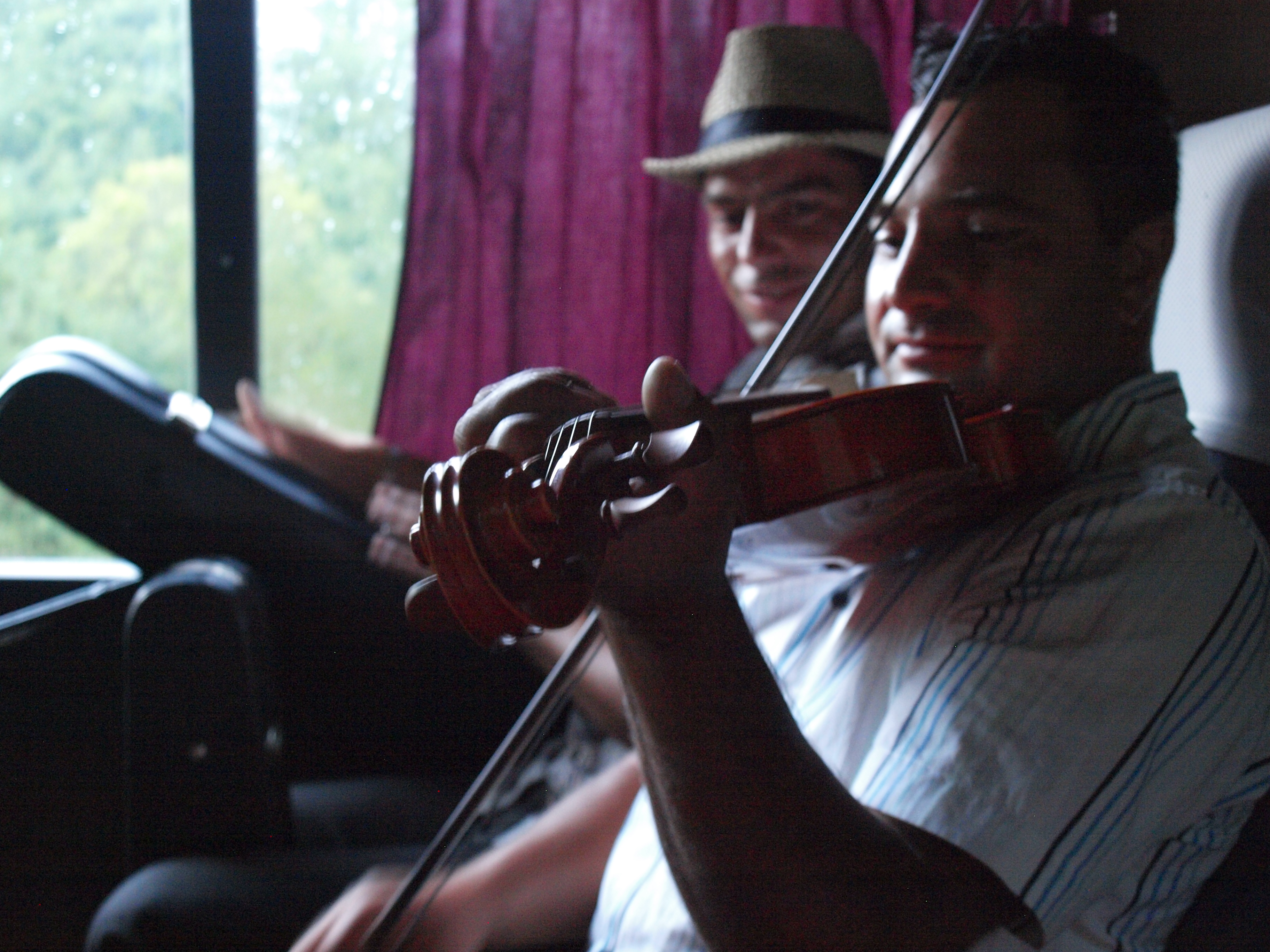 I had heard stories about Kommandói Cigányifolklór Tábor, the Roma folklore camp held annually in Comandău, Romania. Folk music and dance friends told me about the extraordinary string musicians, the nightly campfire parties, and the camp’s make-shift market that sells colorful Romani skirts. This past July, I was staying nearby in Brașov, so I decided to experience the camp for myself.

Comandău is a Carpathian mountain town. The camp organizers hired a coach bus to bring us, about twenty-five dancers and musicians, from Sfântu Gheorghe to the foot of the Vrancea Mountains. Their plan was to transfer us to an uncovered dump truck that was more suitable for the winding mountain road climb.

But while we were approaching the mountain range, a storm was barreling its way over the rugged peaks, heading in our direction. So we waited, inside the parked bus, as it rained on and off for more than three hours.

Lucky for us, some of the camp’s hired musicians were also on the bus: Alexandru Sányika Mezei (violin), his brother Alin Mezei (3-string kontra), and their cousin Kalin Mezei. Their fathers are well-known musicians from Ceuaș, aka Ceuașo (in Romani) or Szászcsávás (in Hungarian), so these guys call themselves the young Szászcsávási band.

After a hauntingly beautiful ride through the mountains and trees in the misty night, we arrived at camp.

Early the next morning, I learned that music lessons are not a part of the camp’s program, so I was free to create my daily schedule. Wanting to learn how to play as much of their music as possible, I played along with the young Szászcsávási band during the dance classes, and hung out with them and their instruments during breaks.

In my field notes, as I was trying to figure out a process for learning their songs, I wrote:

Where should my attention be directed? On the notes? Technique? Rhythm? Bodily energy? Dancers? . . . Notes are important, but not to the exclusion of playing . . .

To learn all the correct notes, but not be all-consumed with learning each note, is not paradoxical. There is something about the energy of the Szászcsávási band’s playing that demands a different way of understanding and approaching music.

To play with them, you have to jump on board and go.

How difficult would that be? Well, here is your chance to judge for yourself. This is another example of the driving musical energy from the bus, this time with Kalin joining Sányika on violin:

Kommandói Cigányifolklór Tábor is organized by Háromszék Táncegyüttes, a Hungarian dance group from nearby Sepsisyentgörgy (Sf. Gheorghe), Romania. You can find more information about them here and their archives of the camp here.